Palazzo Parisi is staffed by a cook, two maids and a gardener, leaving guests to relax and unwind, and enjoy traditional Italian hospitality. The cook, Rita, is famed for her delicious Italian meals, using the best local produce, and has attracted fulsome praise from the Sunday Times magazine and other publications for producing outstanding cuisine "better than the finest restaurants in Italy". Dine indoors or al fresco on the terrace.

Rita is the housekeeper and will look after you beautifully. She works from 07:30 hrs until approximately 14:30 hrs and from 18.00 hrs until 20:30 hrs. Rita will take one day off during the week and will agree this with you. Homemade bread, local eggs and organic vegetables are also available. Cost of food, alcoholic beverages and mineral water not included. Please enquire about the availability of prepared food. 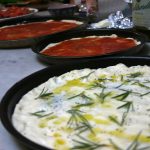 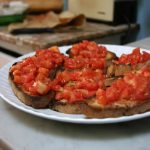 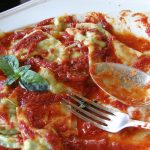 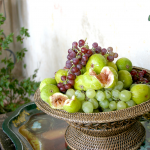 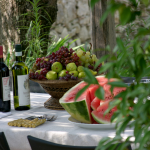 The village of Oliveto belongs to the municipality of Torricella in Sabina, in the province of Rieti, region Lazio.

The locality of Oliveto rises 602 meters above sea level.

There are two gems near Oliveto. The Romanesque church of S. Vittoria (6kms) is on the road to Monteleone and dates from the 11th century. You can normally see the inside on Saturdays and Sundays.  The Abbazia di Farfa (20kms) is a beautiful working monastery.

Poggio San Lorenzo(10kms) is a charming village. It lay on the course of the via Salaria in the XVIIth century and as a result has some pleasant town houses of that period.

Roccasinibalda (8kms) the great castle is sometimes open. Enquire in the village.

Nerola (25kms) has a fine castle, which is only very occasionally open.

Labro, north of Rieti, is a pretty and completely unspoilt village. The owner will show you around her Palazzo.

The dramatic waterfalls of Marmore nearby, the largest man made falls in the world, and constructed by a Roman consul to drain the Rieti marshes, are a famous beauty spot.

Scenic routes are marked on the maps with a green edge to the road.

Casperia, west of Rieti, is a pretty village and beautiful countryside.

Rome (50kms to centre). You can have a wonderful day.

Hadrian’s Villa & Fountains of Tivoli (80kms). A visit to both can be combined.

Just beyond Orvinio on the Vicovaro road  are the ruins of Horace’s villa (30kms), a nice place for a picnic.

Rieti (22kms) has some fine sites.  The portico of the Bishop’s residence is by Vignola and the vaults under the Cathedral are impressive.  So too are the Romanesque campaniles of the Cathedral and S. Agostino.  The Palazzo Vecchiarelli has a magnificent facade and courtyard.  The 17ct. wood ceiling of Saint Peter Martyr is very fine indeed.  There are four famous Franciscan monasteries nearby, La Foresta, Fonte Colombo, Greccio and Poggio Bustone.  Each is less than 10kms from Rieti.  Saint Francis commenced his mission in the area.

Lucus Feronia (40kms) You passed this Roman site when you paid to leave the motorway, whose exit roads were built round it.  It has some good floor mosaics and produced a very fine portrait head of Vespasian.

L’Aquila (75kms) capital of the Abruzzo is a magnificent and rather wild ancient city.

Though at the limit of medium distance, anyone seriously interested in architecture and the history of gardening, must consider visiting Villa Lante at Bagnaia and Palazzo Farnese at Caprarola, both about 100kms distant and about 15kms apart.  They are the property of the Government and beautifully restored.  Bomarzo, though somewhat of a trippers paradise, is well restored.  It is about 10kms this side of Bagnaia.

Viterbo (110kms) also at the limits of an easy excursion, has 2 magnificent paintings – a flagellation and a Pieta – by Sebastiano del Piombo in the Museo Civico.  The museum is next to S. Maria della Verita with frescoes by Lorenzo da Viterbo.  See also S. Sisto and the Papal palace.  Lunch Café Schenardi.

Subiaco for Saint Benedict and the origins of European monasticism.  If you visit, you must detour on your return to Arsoli to see the magnificent Palazzo Massimo (under restoration, not open at the time of writing).  The family claim descent from Quintus Fabius Maximus, (c275BC –203BC), erstwhile Consul and mentioned by Virgil in the Aeneid.

Fortress and Duomo by Sangallo.

Palestrina for the famous Roman mosaic floor of the animals on the Nile.

Ninfa (140kms, Sermoneta, nr. Latina).  Again somewhat far, but arguably the most beautiful and romantic garden in the world.  See note at the end of this brief from the International Friends of Ninfa. (You must check that it is open).

NB Ascoli Piceno  (130 kms, 2 hrs).  This is one of Italy’s secret treasures on the Salaria beyond Rieti.